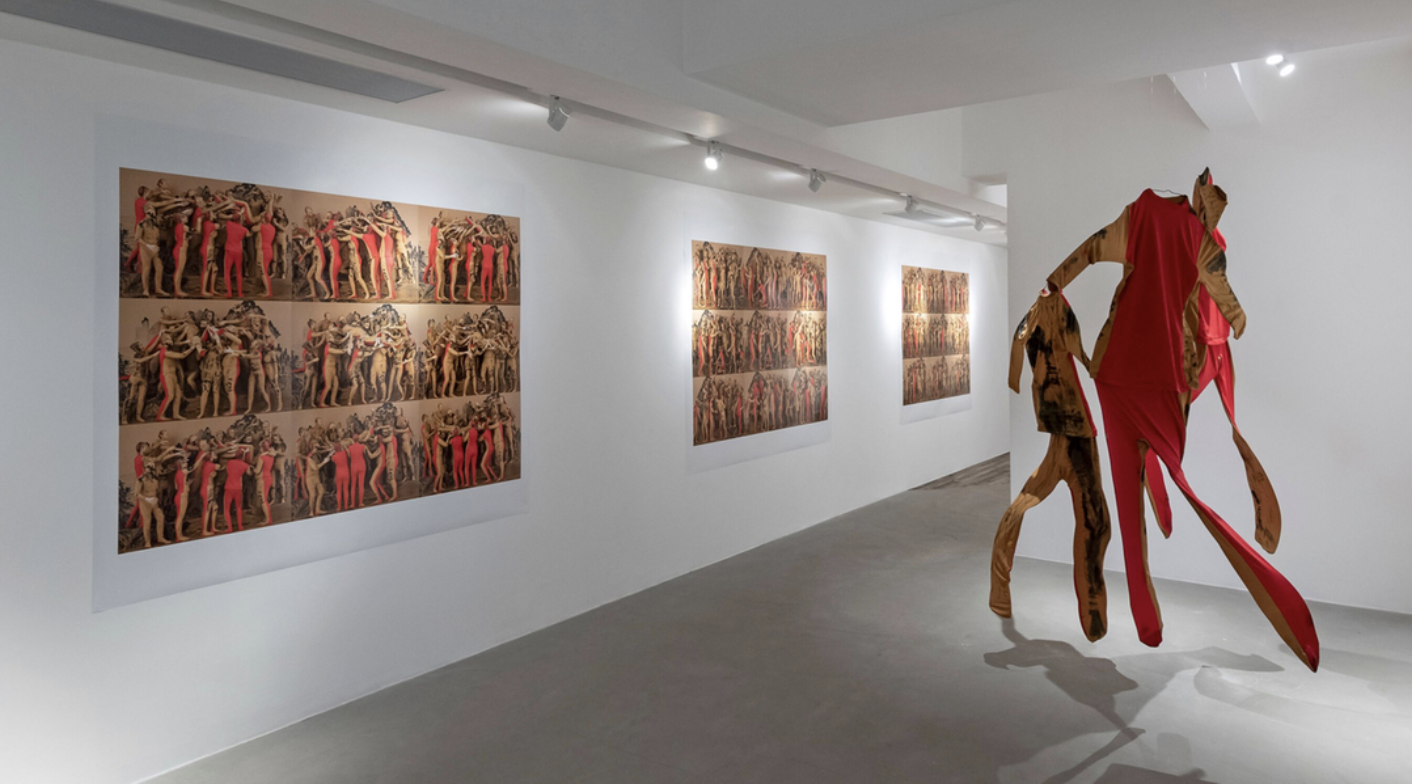 LUI BOLIN is an avid observer of contemporary society and the urban environment, exploring critical issues and controversies around the globe through his intricate works of art. Fusing sculpture, performance and photography, the Chinese artist joins the dots between ecological damage and consumerist societies, ancestral traditions and cultural symbols. Following on from his disappearing act in 2015 where he melted into the flags of 193 UN countries to raise awareness of the United Nation’s global goals to end extreme poverty and to fight inequality, injustice and climate change, the artist’s latest feat includes becoming invisible at the supermarket.

“Louder, bigger and bolder” have been mantras dominating contemporary art for decades. The artist becoming the work of art, pushing his personality in the foreground and making headlines have been the order of the day since the YBAs, if not long before. Today’s art sector may seem all about standing out, being seen and heard. Becoming invisible is quite literally and symbolically in direct opposition to where contemporary art is heading. How do you see your role and work in this context?
Looking back, artists have been pursuing individuality from the beginning of Impressionism. In the past century, artists have tried their best to bring their own personality and creations to the extreme. First Dadaism, then the development of new media, video art and body art, art is becoming increasingly omnipotent. Artists today can turn all objects found in daily life and the world surrounding them into works.

The reason why I chose to hide myself is something coming from my own life experience and interactions with society. I once felt that I was a superfluous person and had nothing to do with society, even dispensable. This experience is the driving force behind my first series. It formed the emotional basis and the root of my works. When I first started the Hidden in the Cities series in 2005, my studio was being demolished. Among more than 140 artists living and working in that artist studio compound in Beijing, I was the only one to do works like that as a response and protest.

My protests with the disappearance of the body aim to call for more people to pay attention to the artist’s struggles to survive, as well as to their works. Therefore, by disappearing and by making the body invisible, I wish to make them more visible. I hope the works can help raise awareness of key problems and issues happening in our world today – pollution, climate change, inequality and so forth. I see it as my way of artistic expression, a way to communicate with society and to share my life experience and my views on the world.

Your work speaks of fundamental dangers to our societies, including the fear of the individual to disappear, to fade out and commercial interests taking over. How does this find its echo in your recent supermarket works? Tell us what inspired you.
I shot the first supermarket-themed series in 2009 and it was about instant noodles. At that time, I felt Chinese food, including very basic products like instant noodles, was raising serious questions about safety issues. Before 2009, people living in China did not have a high awareness of that. With the outbreak of many scandals and nation-wide incidents, more food problems have come to the fore.

Then I made works about urea-processed food, puffed food and bottled water. On the surface, they are all photographed in the supermarkets, and all look very appetising. However, behind the glamorous images are my worries and concerns about food safety in China. There are comments on the internet saying those works remind them of Andy Warhol, which are aimed at consumerism, but they are not. I want to express my concerns on food safety – when I go to the supermarket in China, I don’t know if I have confidence to buy bottled water, because I don’t know which ones are good and safe, and which ones may cause harm.

… but there are strong political connotations too in your work. Does art still have the capacity to empower the individual, to talk truth to power?

From 2006, I took the first photograph with a laid-off worker in front of the slogans from the Cultural Revolution period. Then from 2007 until 2009, I have been shooting photos with slogans and words about China, big-character posters, and political propaganda. Perhaps because of these works, many people think that there will be political discussions in my work. As a matter of fact, ever since I was young, from the memories I still have, these slogans and words would be everywhere in our daily life, so it’s very natural to depict them as a way to share my life experience and stories. If there were political connotations in them, I think it may not come directly from the works themselves, but from our entire society where this ideology is embedded.

Artists are not politicians and by no means would I want to make myself a political plaything. I am an artist, and as an artist the only thing we can do is to use images, colours, and lines to express our thoughts, interpretations and reflections on the world. The attempt to touch upon politics using art won’t work. That’s why art is comparable to religions and science.

The year 2018 has been a year of truth and revelations in terms of global environmental meltdown, with alarming reports about global climate change making the headlines. Yet politics are slow on the uptake. Can art make a change to public awareness of what’s at stake? Does art have a responsibility?

Just as everyone else, artists are normal human beings firstly. Facing the same crisis of the human kind, the world, and the spiritual, we share the same feelings and concerns. However, we can make a difference using our artistic creations and expressions to interpret these problems, using art as a more accessible medium to raise awareness, to attract attention and to open up discussions. Artists and artworks have responsibilities to foster social conversations and encourage positive changes.

Who would be your dream collaborator for a future project be, and why? Pick a film director, photographer, writer, musician …
There are a few artists that I like very much. Banksy is one of them and I really hope to have the opportunity to work with him. For photographers, I wish to collaborate with Annie Leibovitz again – we worked on a Moncler project previously, but I feel there is more we can explore. I am also very interested in videos, documentaries and movies. I once made a documentary about my project and my experience in Pyongyang, North Korea last year. It was a documentary video. I wish I could make some of my projects and stories into a documentary or artist film, and I’m still looking for a good film director currently.

What’s more important in art today: craftsmanship or ingenuity?
I think art today is neither about craftsmanship nor ingenuity. As an artist, you have to be very sensitive to what’s happening in the world and know the crisis and topics we should work on. Real art should impress the soul, not just the eyes. I think great art can use props found in modern life to discuss and guide the soul. It can find ways to express our helplessness, indifference, crisis and the subtlest psychological feelings in depth.

Are you a future-optimist, or pessimist?
I am pessimistic and optimistic at the same time. In the era of the internet and smartphones and looking forward to the 5G technology and its application in real life, human beings are not completely human any more. They act like an information hub, a portal for mobile phones. We are increasingly being manipulated by smartphones and numerous applications. We are just part of the data.

However, I am also optimistic that we will continue evolving at the same time. Just like 150 years ago, people were not accustomed to making calls and flying. Fifty years ago, humans weren’t comfortable using computers nor had easy access to the internet. Human beings are slowly evolving while technologies are evolving too; we are constantly searching for souls, for a balance to live with technology in modern life.

Imagine one day humans can live on another planet through space travel. They may be hybrids of humans and technology, and maybe they can travel like the light – these are beyond our imaginations now. But contemporary life may go beyond the primitive people’s imaginations too, so we never know. In that way, I am optimistic.

OVER THE INFLUENCE GALLERY HONG KONG 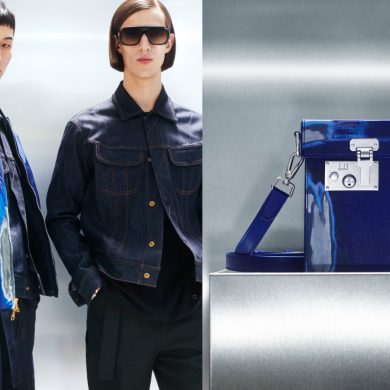 Dunhill welcomes the spring with the Abrasion capsule collection