QUINTESSENTIALLY British – the perfect summary of Riccardo Tisci’s AW20 collection for Burberry at London Fashion Week. Placing the theme of heritage at its core, in the new collection entitled Introducing Memories, Tisci incorporates not only personal memories of his time studying at Central Saint Martins in London but also memories of Burberry and those of Britain as a whole.

Keeping in theme with the brand’s codes and heritage, the collection of AW20 tonally was very Burberry. A neutral colour palette persisted throughout the collection, showcasing mostly beige, crème, light blue, and occasionally a new shade of mossy green was seen on the catwalk.

Although the AW20 collection certainly included looks that incorporated Burberry’s famous tartan, as well as its return to Nova check, Tisci nevertheless put a youthful and quite a playful twist on the brand’s trademarks. One of his renditions became a new way to combine plaid, some spotted with fuzzy brown shearling, others with a pussy-bow shirt or a white pleated skirt – a little maximalist for the British house.

Celebrating the British origins of Burberry, Tisci didn’t shy away from including uniforms, associated principally with Britain, and most importantly its sports. Such looks included shirts which are heavily reminiscent of rugby shirts and cricket players’ jumpers.

For Burberry’s AW20 collection, Riccardo Tisci has truly outdone himself. Entertaining the notion of the brand’s history, Tisci managed to create an entirely new experience of Burberry. Although leading the house’s creative designs for only two years, Tisci has made its mark on Burberry’s history by accentuating designs that lie at the house’s very core, while also making it relevant to contemporary audience. Now we can in full confidence say, that truly ended London Fashion Week with a bang. 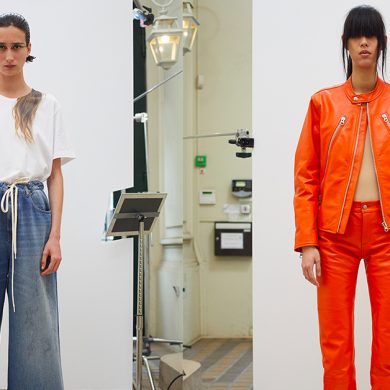