AS WE entered the Church House Westminster for the Preen by Thornton Bregazzi AW20 show, no one was quite sure what to expect. Even as the models started walking down, the feeling persisted. It was a show profoundly abundant with contrasts: where historic architecture meets futuristic set design, military style is fused with elegant ruffles, and stylised instrumental music is followed by classical melody from film Don’t Look Now.

The ‘60s Don’t Look Now played an  significant role throughout the show, seeing how it served as the main inspiration behind the AW20 designs of the creative duo of Preen, Justin Thornton and Thea Bregazzi. Influenced by Venice, where the film takes place, Thornton Bregazzi decided to move their trademark floral prints aside in favour of boxy suits, ruffled dresses, and red lacquer coats.

Suits, and lots of them, which was perhaps the biggest nod to Donald Sutherland’s trademark look in the film. However we can’t help but think of Diane Keaton, when seeing Preen’s boxy tailored blazers, oversized trousers, and massive ties.

Ruffles made from sustainable viscose also had their vital moment during Preen’s show. Spotted on the hemlines of dresses, on the W-shaped neckline shirts, or spread across the pussy-bow shirts, the romance and femininity of ruffles were evocative of Preen’s previous designs.

Largely abandoning florals, this year for its AW20 collection Preen went for complete fashion maximalism. Aside from the suits, ruffles, and camouflage, it was the mix of gold with red in contrasting finishes, such as sequin and lacquer, that seemed the most experimental for Preen.

Although such a diverse mixture of hues and textures might seem overwhelming, the fashion show and the showcased collection looks were surprisingly harmonious with one another. Due to their dominant cinematic homage, the looks were all created under an umbrella of Venice meets Hollywood theme, thereby making the collection a breath of fresh air at this London Fashion Week. 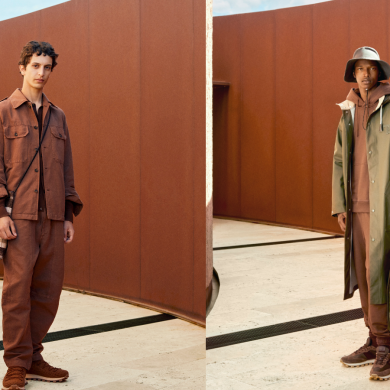