MARIA Grazia Chiuri, Dior’s first female creative director, certainly has courage – bringing her convictions to the runway – and not for the first time.  For AW20, Chiuri showcased her Dior’s womenswear collection which served as a visual feminist manifestation against sexual harassment. Upon arriving at the Jardins des Tuileries show space, guests were greeted by the sign “I Say I” – the creation of Claire Fontaine, a  conceptual feminist artist, who takes her name from a French brand of school notebooks that use illuminated text-based signs to underscore contradictions in society.

Fontaine’s creations were used extensively inside the venue, where illuminated manifestos suspended from the ceiling. The rainbow of provocative slogans included “Patriarchy = Climate Emergency”, “When women strike the world stops” and “Women raise the upraising”, all of which supported the #MeToo movement. The most striking, however, was the trio of “consent” slogans that hung at centre-stage, appearing in the colour sequence of a typical traffic light – green, amber and red – perhaps alluding to the idea that misogyny and sexual harassment must come to a STOP. Regardless, the free flow of models advanced, manifesting the power of feminine dress as they fearlessly marched down the newspaper-covered runway.

Ironically, the show opened with typically masculine looks, which made a bold statement about the elimination of gender codes in fashion. The Bar suit was given a new lease of life, crafted from ribbed-wool and styled with a shirt and tie.

Fishnet socks and flat black boots added a gothic charm, while headscarves and baker boy caps took us firmly back to the ’70s. Chiuri – inspired by old photos of her mother and excerpts from her own teenage diary – has brought a youthful energy to the collection, which will undoubtedly appeal to younger admirers with a generous disposable income.

Masculine-inspired patterns also emerged, such as houndstooth, camouflage and Monsieur Dior’s favourite – checks, all of which were occasionally paired together. Chiuri isn’t afraid of a pattern clash, that’s for sure.

As the collection moved away from androgynous silhouettes in black, red and white, along came the delicate robes – from structured dresses with sheer-sleeves to embroidered mesh sensations, made for all women of elegance. And lest we forget the fringed frocks that followed, sweeping along in an array of feminine colours such as lilac and pistachio green – a firm favourite this autumn, we predict.

Once again, Chiuri must be applauded for reviving a historical house through a contemporary lens – or rather a feminist lens. Her AW20 collection has an eclectic range of offerings, from tailored jackets and pleated skirts to fringed gowns – with the ready-to-wear title deeming them suitable for any occasion.

Over recent years, it has become clear that feminism is the golden thread that binds all of her collections together. And held the day after Harvey Weinstein’s incarceration for sexual assault, the show was a fitting time for Chiuri to reveal her latest feminist agenda. To further her feminist cause, however, she could ensure greater inclusivity on the runway.

But one thing stands clear: fashion can make a powerful, perhaps destabilising, political statement – and we’re so here for it. 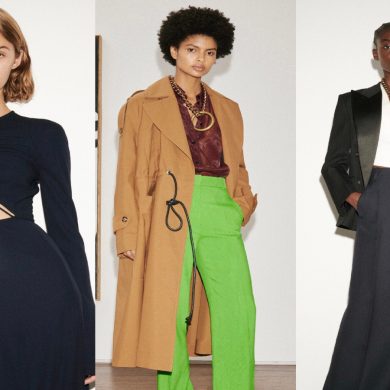