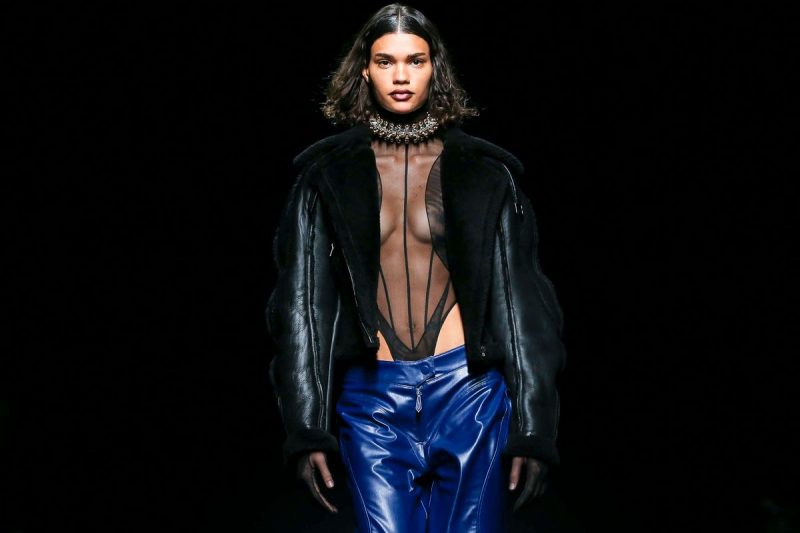 SENSUALITY was the key theme to take away from the Mugler AW20 collection for Paris Fashion Week Held in Palais de Tokyo, the French fashion house’s creative director, Casey Cadwallader, presented 32 looks against his blacked-out backdrop.

The palette was dark and austere, with black, grape and dark brown hues dominating most of the collection. Tailoring was cut from leather and trousers hung low, on occasion revealing much of the models’ lower abdomen. Jewellery was a focal point, with gold and sliver embellished cuff-like chokers, earrings, bracelets and even anklets, breaking up the lines formed by Cadwallader’s meticulously tailoring.

Microbras were worn under mesh and leather jackets, paired with under-bust corsetry and low-rise trousers that we witnessed throughout the show. Print was sparse with only one look featuring a flocked tiger-like camouflage two-piece, which was again dropped under the bust and worn with a ribbed roll-neck. Wholly wearable daytime friendly elements of the collection were juxtaposed with looks that spoke only of sex.

A series of sheer mesh dresses were adorned with what looked like ball bearings, and paired with high-shine knee high boots. Mugler’s signature hourglass silhouettes were accentuated with elaborate – barely there – mesh insert and cutout dresses, which made up the shows closing looks. Fundamentally, waists were nipped, hips and shoulders exaggerated and skin was bared at Cadwallader’s Mugler show this season. 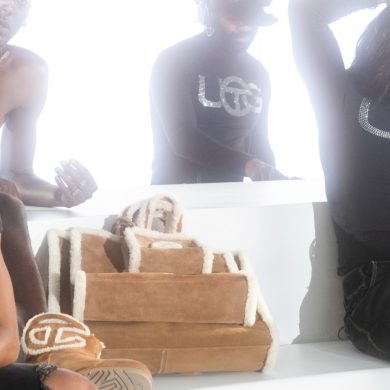