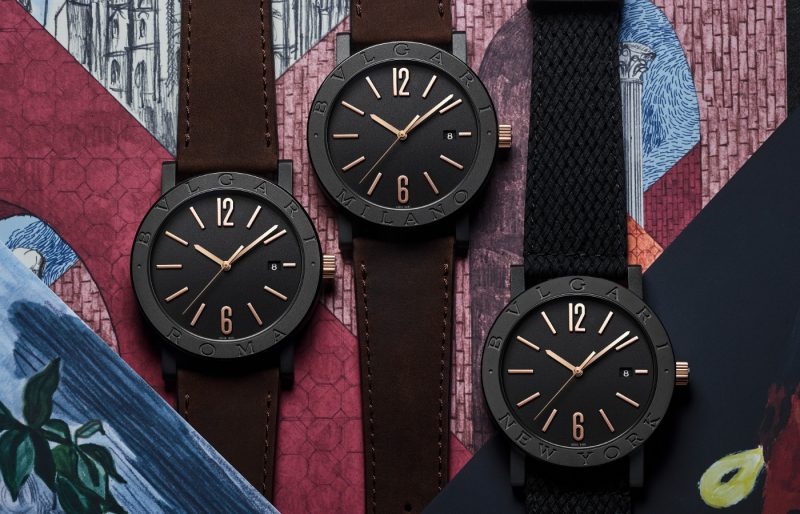 THE Bulgari Bulgari Cities Special Edition 2020 has been released featuring the newest succession of the jeweller’s definitive style reimagining it this year as the ultimate sports watch. The design aligns with the legacy of the brand continuing to be at the front of luxury watches market for the past forty years.

The collection is inspired by nine cities that have hosted Bulgari – London, Paris, Rome, Ibiza, Milan, Dubai, Tokyo, Mexico City and New York; these locations are also at the epitome of today’s urban luxe. Each City Edition comes with a collection of 12 individual art prints made by one of the nine young artists that were commissioned to work on this special edition to share their portrayal of the cities and their connection to Bulgari.

The new watch features a 41 mm steel case coated in black DLC (Diamond Like Carbon) to accompany the new modern luxury lifestyle. To highlight the city it portrays, the bezel is engraved with the Bulgari logo alongside the name of the place. The watch comes with two interchangeable straps – one is made our of brown calf leather and the other is made of black rubber.

The decision to have two straps was to ensure that this watch was dynamic and adaptable to your situation. It can be worn both night and day, and during the week and into the weekend. The watch can be transported with you everywhere as it is encased in a black grained leather pouch complimentary of the design and the luxury it oozes.

The Bulgari Bulgari was debuted in 1977 after a demand accumulated after the release of the Bulgari Roma – a gift to the brand’s hundred most loyal clients. This limited edition watch that had the brand’s name engraved on it, made it not just Bulgari’s, but a global first of the name of the jeweller to be engraved on the case of the watch.

The watch’s original design is however a fusion of the jeweller’s Italian history whilst drawing inspiration from architecture. The geometry present in the cylindrical case mirrors the columns of the ancient Roman monuments, while the bezel echoes the imperial Roman coins – the Emperor would engrave the outside of the coins with his portrait adoring the centre. As the years have gone on, the watch has progressed to reflect the changes of modern life but keeping the aesthetic the same due to its timeless nature. The success of the Bulgari Bulgari led the Italian brand to establish their place as watchmaker leaders in the industry.

The 2020 Bulgari Bulgari collection serves as a more intimate series of watches due to the connections to certain cities. The first Bulgari Bulgari watch is inspired by the brand’s birthplace of Rome – this special edition will run in a very limited distribution to commemorate the city. This was the place that in 1881 Sotirio Boulgaris decided to settle and where he began to design.

As mentioned before, nine artists were asked to collaborate on this project to create a portfolio of  12 designs for each of the watches. The number twelve is symbolic of the marks on the dial. A decision was made not to use photographs, but rather illustrations have a better ability to translate intimate feelings and are depictions that go beyond a time and space.

London hotels celebrate the arrival of the Frieze Art Fair