By Imogen Clark
In Main FeaturesMusic

BRITISH brand Stella McCartney announced today the launch of a digital festival called Stellafest with the aim to raise funds to end violence against women.  The festival will consist of an exclusive array of artists from across the globe who have pre-performed during lockdown and will run from the 9-12 July across all of the brand’s digital channels – even their newly launched TikTok.

Mentioning only a few, Brian Wilson, Chloe x Halle and Kelis will be partaking in this charity festival, with more names being announced each day of this festival. Exclusive experiences with certain artists will be auctioned off in aid of helping against this violence on – prizes include a virtual studio visit with the designer herself and a signed one-off garment as well as a cooking class with Kelis.

This initiative aligns with one of the aspects of the brand’s mission outside of fashion, with a saddening figure of one in three women experiencing physical or sexual violence in her lifetime.

Many women do not feel safe to speak to those in authority about incidents as well as women of colour experiencing further injustices such as the prospect of potential police brutality and the structural racism that is steeped within the system hindering their cry for help.

The current situation over the past couple of months where staying inside was the norm unfortunately led to increased domestic violence reports across all continents. The UN Population Fund stated that they believe that 15 million cases of domestic violence occurred due to the consequences of Covid-19 keeping us at home. 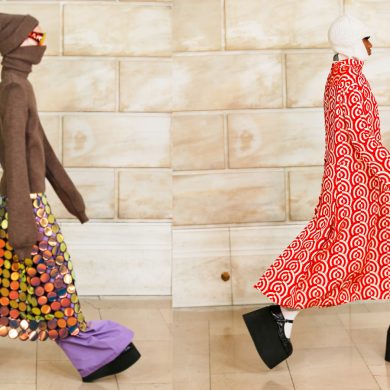