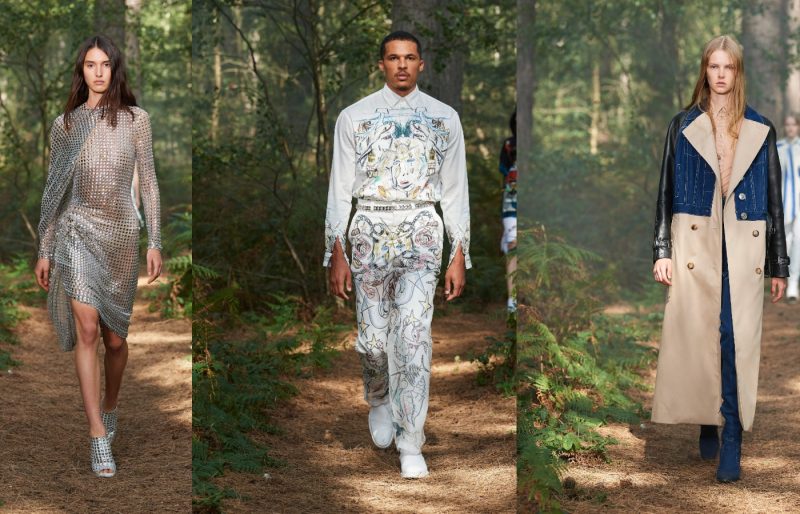 BACK in 2010, Burberry became the first fashion house to live-stream their fashion shows opening the exclusivity of a physical invite for all to experience online. Today, no one was invited and everyone watched from editors to fans of the brand from an online streaming platform as they unveiled the spring-summer 2021 collection.

Titled In Bloom, the spring-summer 2021 collection aimed bring together and highlight the different characteristics that make up Burberry whilst embracing the juxtapositions of the United Kingdom.

The initial thought that inspired the collection was the idea of everything in life being circular. “The circle is hugely symbolic – regrowth, renewal, the circle of life. The collection is called In Bloom because I was think about regeneration, about dynamic youth, about nature constantly recreating itself, always growing and evolving, always alive” says Chief Creative Officer Riccardo Tisci.

Delving into what Tisci says, it is clear that the effect of the past couple of months have weaved their way into this collection. He wants to celebrate his Burberry whilst respecting the old codes and strips Burberry back to the basics.

Inviting German artist Anne Imhof to collaborate on the digital show experience is an immediate sign that the traditional rules will be broken and as an audience we will be given something at the forefront of online fashion shows. The British brand has always been the leader when it comes to utilising technology with the announcement a few days ago that Burberry would be the first luxury fashion house to partner with online streaming giant Twitch.

The combination of Twitch’s squad streaming function that allows you to view the show from four different angles simultaneously and the creative genius of Imhof taking control of the performance, this was a show not to miss.

Presenting a modern day fairytale with hints of dark romance, a whirlwind of ritualistic performances and installations, the concept of art meeting fashion was evident here. Models and dancers created a never ending flow of bodies and movement to the soundtrack of musician Eliza Douglas performing live echoing through the forest. This haunting yet beautiful combination blended together to create a show experience like never before.

Water played a huge role in the inspiration of the collection as Burberry is widely known for its trench coat. For the womenswear, trench coats were made from rubberised cotton and leather with denim jacket details, whilst park coats have energetic prints protected with rubber, canvas and leather.

Double waisted trousers paired with see-through shirts were seen amongst chiffon sheer trousers and stretch-satin dresses that had corsets and layered tulle. Notable evening wear was drenched in crystal embellishments and second-skin leggings made a return – collectively coming together to create a magical collection with a contemporary twist.

Menswear also played with the water motif as shark fins were sculpted out of 3D neoprene on car coats and nautical connotations were seen in shirt prints. Trench coats came sleeveless this season while parka coats were seam-sealed. Boiler suits and wool bib-front trousers also played a role in looking at stereotypical British seaside attire alongside classic fisherman style knitwear.

The fantasy that Burberry created wasn’t one too far from reality, and yet it had the ability to distract us with its modern visual mythology. Tisci wants us to focus on freedom and renewal and he did just that. There is no need for change, but rather in the way Tisci has modernised Burberry, we just need to rethink the way we are looking at things.