THERE are few designers with a CV quite like Edward Crutchley. Since graduating Central Saint Martins in 2003, he has been a consultant to Kanye West and streetwear giant Supreme, and worked with Kim Jones from his time at Louis Vuitton to Dior. So, when Crutchley is on the schedule for London Fashion Week all eyes are on him.

For his SS21 collection, the designer was inspired by the 1986 film Gokudô no Onna-tachi directed by Hideo Gosha – a Japanese movie centred around a woman who takes on the leadership of one of the most feared gangs when her husband is sent to jail. Combining the decadence of the ‘80s with the characteristics of badass heroines, the collection has a his-and-hers style to it.

The menswear sees more casual pieces such as pyjama collared shirts, cropped trousers and Bermuda shorts – however, all still in keeping with a smart tone. In particular to note are the full-length Ottoman court kaftans with padded belts to allude to the glamour in the film, while similarly, the womenswear sees exaggerated flounces and sarong-inspired skirts to heighten the mood.

The fabric choice was interesting as the collection had hints of global inspiration, from ribbon stitching inspired by Mariachi jackets and hems that are reminiscent of Irish dancing dresses, but the collection was mainly comprised of classic British fabrics. Prince of Wales check, houndstooth and gingham were dominant players in the SS21 collection leading back to the designers roots.

Legendary milliner Stephen Jones transformed the idea of the floating ribbons on Chinese temples into fascinators that stand tall on top of the head or alternatively, are worn to be tied under the chin. 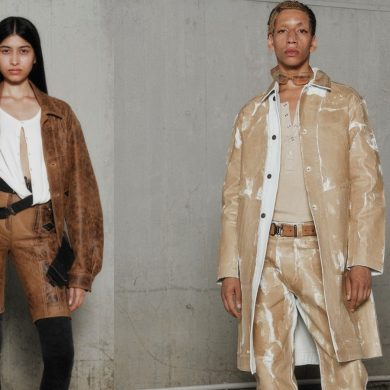