IN LIEU of a conventional presentation, Marine Serre offered her SS21 collection via a short film entitled Amor Fati. Chilling, subversive, futuristic, and strangely  beautiful, the piece encapsulated the weirdness and fear surrounding that has characterised so much of our cultural consumption recently, while successfully platforming the ingenuity of Serre’s latest work.

Translated from Latin, Amor Fati notes the love of one’s fate, the love, or understanding of the necessity, of everything that occurs in life: a poignant sentiment to explore during a pandemic.

Directed by Sacha Barbin and Ryan Doubiago, and accompanied with an eerily sparse composition by Pierre Rousseau, the film opened on a shot of artist Juliet Merie from above, as she lay on a kind of white platform. She is naked, airbrushed to alien plasticity, and is slowly operated on  by four figures, clad head to toe in Marine Serre monogrammed pieces, who approach simultaneously from each corner.

Merie is tattooed with this monogram, and undergoes a series of experiences with the singer, Sevdaliza. They encounter different groups: figures dressed in aspects of the new collection, who perform private rituals or further manipulate the bodies of the central characters.

The collection itself is rendered in grey, black, red and glittering blues, contrasted by Merie’s monogrammed skin. Pieces were largely sporty and utilitarian, catering to the violent, futuristic landscapes they were exhibited within. The blues were worn with gem encrusted head pieces and fine balaclavas. The reds were made in rich fabrics, but each colour was augmented by the Marine Serre crescent.

The performance spoke of ideas of the audience and their gaze, as crowds witnessed alien operations. It explored fear and absurdity; exhibiting a collection created during extraordinary circumstances via an extraordinary project.

Sevdaliza in the presentation 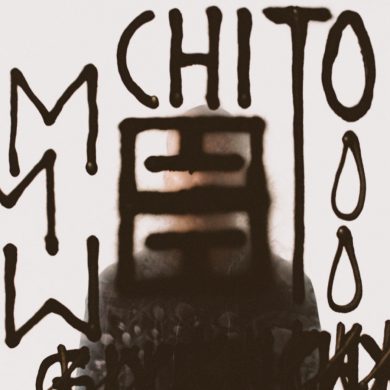