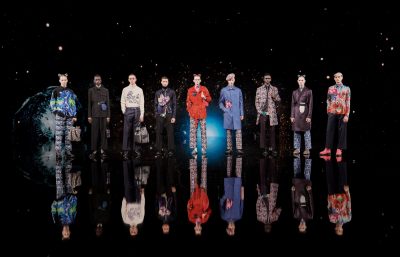 THERE is an anticipated excitement to see what Artistic Director Kim Jones is going to do next. Having catapulted menswear at Dior into a new realm, one untouchable and far ahead of its peers, Jones is one of those rare designers where everything he touches turns to gold.

This season, he is touching upon juxtaposing notions – tradition and innovation – delving into the unchartered territory of where virtual and reality meet.

In tune with the times, as well as the inspiration behind the collection, the show was held virtually for us all to experience, opening up the exclusive nature of luxury fashion to the masses. The collection shows the transition from the couture house to the international brand worn around the world as it reminisces about the past and dreams about the future.

Since the start of his role at Dior, Jones has shared his journey with creatives, designers and contemporary art figures season upon season, allowing others to contribute to this new Dior. This season, for the fall-winter 2021 collection, the British designer has teamed up with American artist Kenny Scharf. Known for his distinct drawings centred around pop culture and science fiction, his cartoons are futuristic while still being full of historical art movement references.

Translating these pieces of art onto clothing, the Dior ateliers printed and embroidered a gallery of archival pieces and newly commissioned ones onto the FW21 collection.

Exclusive to Glass, this series of photographs by Ken Ngan shines a light on the Savoir Faire and process in the Dior ateliers when taking the illustrations and bringing them to life on each piece.

Every Dior collection by Kim Jones shines a light on tailoring proving that this fashion house’s roots have not moved too far from its days as a couture house. From tailored coats to slender single-breasted jackets, all come designed with a more relaxed perspective as they are not too fitted and some come with a belt around the waist – paying homage to the Bar jacket.

Sourcing influence from China and building upon the global nature of creativity, traditional Chinese techniques and materials were used in the French fashion house’s new collection. Yoon Ahn’s jewellery in the collection sees a bold use of jade and lapis, while Lemairé reinterprets chrysanthemum blossoms into boutonnieres and milliner Stephen Jones returns with more berets.

The combination of a British designer, a French house, an American artist and the influence of Chinese techniques has collectively created a collection that unifies rather than distances.

At a time where connection seems foreign, Dior has presented a collection that paints a bright and colourful future, but most importantly, one with a message of togetherness.