IF THE Gucci autumn-winter 2021 collection was a movie, it would be the biggest selling blockbuster of the year. And, if it were an album, it would be Gucci’s greatest hits. It was, however, a party with an open invitation and which led us to see a collection entitled Aria that will surely go down in history for all the right reasons.

Coming into his sixth year as Creative Director of the Italian fashion house, Alessandro Michele decided to celebrate the brand’s birthday by paying homage to the instantly recognisable codes that we all know but also the designers who have shared the privilege of being in his place.

“Going through the hour when everything originated is a great responsibility for me, and a joyful privilege,” remarks Michele. “It means being able to open the locks of history and linger over the edge of beginning. It means soaking in that natal source to relive the dawn and the coming into view”.

Rewinding back to the very beginning, when founder Guccio Gucci worked as a porter in London’s Savoy hotel and gained inspiration from the guests’ luggage to later set up his own company, Michele decided to set the scene of his digital show in a makeshift nightclub named Savoy. And, so we begin our journey into Gucci.

As the saying goes Lights, Camera, Action, and the first model walked down the illuminated corridor in a rich, scarlet red velvet suit with peaked lapels oozing the same sex appeal as the original version Tom Ford presented in his AW96 collection.

This was our first taste of Michele’s nod to the American designer who not only injected Gucci with sharp tailoring during his time at the House but also turned on Gucci with some unforgettable and unapologetic eroticism.

Embroidered black lace skirts with a thigh-high split and square-toed slingbacks made their return from Ford’s SS96 collection, bringing back the same ‘sexual tension’ his predecessor left.

This type of tribute is not unheard of, but this show was the first time in history when two brands came together. The two designers refuse to label this as a collaboration, but rather in typical Michele fashion, they want you to call this a hack.

Gucci collided with Balenciaga, or maybe Balenciaga morphed into Gucci, but together they recreated looks and individual pieces so equal in design weighting that you have to question the origin.

Admitting he was attracted to Demna Gvasalia’s ‘noncomforist rigour’, Alessandro Michele didn’t aim to steal the Georgian designer’s pieces but instead wanted to reinvent and breathe life into Gucci while taking the most recent silhouettes that have weaved their way into our trends and bringing them back with a twist.

The Balenciaga AW16 off-the-shoulder red puffer with a chunky jewelled turtleneck was reimagined in beige with the classic Gucci monogram print, the purple wrap top from Balenciaga’s SS17 collection came back with the red and green stripe like a badge of honour and the French brand’s knife boots presented themselves lathered in GGs – these are only a few examples of the hack but you get the gist. Also, logomania is back.

Infused with the Gucci beige, the GG’s, the founder’s horsebit detailing, Ford’s drama, Gvasalia’s daring modern approach to clothes and Michele’s androgyny, the collection was a cocktail so well served I don’t think we will ever forget its taste.

The entirety was revolutionary in nature and left us with the message that Gucci is here to stay for another hundred years, whether it’s the minimalism of Ford or the maximalism of Michele – Viva La Gucci. 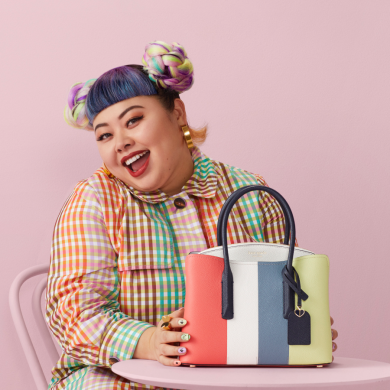