By Joshua Hendren
In CultureMain Features

All this and more – Glass speaks with Vietnamese-born US actor Lana Condor about a film career that has seen her go from superhero to rom-com darling, guest voice and YouTube star

STRAIGHTAWAY Glass realised that Lana Condor’s astonishing five-year movie career couldn’t possibly be summed up in a one-hour phone call. You may know Condor from the To All The Boys I’ve Loved Before franchise as the no-nonsense Lara Jean Covey. Based on the books by Jenny Han, these films made the 23-year-old actor a rom-com darling. But since her 2016 debut role as Jubilee in X-Men: Apocalypse, she has quickly managed to demonstrate her versatility as an actor.

As our call begins, I ask whether there was any pressure on her in the way she represented the Asian-American lead in Netflix’s To All the Boys. “When I was auditioning for it I almost didn’t even [think I was] auditioning for something bigger than myself. I was just so focused on the story, the plot and wanting to impress Jenny [Han].”

She admits that it was rare for an Asian to take the lead in a rom-com and since then big screens and streaming platforms have been noticeably working towards greater diversity. Condor feels optimistic that the phenomenon isn’t just a “moment”. She adds, “It wasn’t just awesome for the summer. Obviously, there are more [movies] being made. You want to show the world an accurate depiction of the real world, and the real world is very colourful.”

Despite her accomplishments, Condor admits that life as a young actor has not always been easy. “I turned 18 on the set of my first job, X-Men. So I’m not a child actor in the way you might think. I had life experience but not on the scale of being my own adult. As you get independence for the first time, you’re also trying to juggle a job.”

At the time of filming To All The Boys, Condor was simultaneously filming Deadly Class, a dark action drama on the SYFY television channel set in the 1980s. Condor describes that period in her life as a watershed year in which she could either sink or swim. “That was the most stressful time in my life. The only reason I was able to [handle the stress] was because of the support of my team, my parents and my family.”

Beyond her current successes, Condor reveals that she still wants to graduate from uni but hasn’t had the chance to because of work demands. She adds, “I want to be a happy person when I go to sleep at night and don’t want to get swept in the glitz and the glam.” Condor feels that relocating to Seattle with her boyfriend, the singer and actor Anthony De La Tour, has definitely helped.

She tells me her best career advice was given to her by the British actor James McAvoy, whom she worked with in X-Men. “He told me to always have a secret in your character because it draws the audience in. They want to figure you out because they know that there’s something that they’re not fully 100 per cent getting.”

When I discovered Condor’s taste for thriller novels, I asked her to choose the one she would take from page to screen. After some deliberation, she settled on two choices: No Exit by Taylor Adams, a survival thriller, and Ruth Ware’s latest book, One by One, a whodunnit. While she would love to appear in a thriller movie, “I think a lot of people like to see me falling in love,” she says with a sigh, then a laugh.

In the meantime, Condor voiced the character of Kaoru in Netflix’s animation series Rilakkuma and Kaoru. “I loved it,” she exclaims. “I do very well alone, so being in [a tiny room] by myself for 16 hours a day with the producers outside the room was great.”

However, Condor found it more challenging to sit at a table to read with Will Arnett, Amy Sedaris, and JK Simmons for her guest voice role in BoJack Horseman, another animation project. “It was scary because it was my first time being at the table with actual voice actors [whose] voices are so rich and luxurious and so animated that I felt completely out of my league.”

Condor, who was adopted by an American family after five months in a Vietnam orphanage, feels more at home filming for her 684,000-subscriber YouTube channel with her boyfriend Anthony. I asked if this new creative outlet has piqued an interest in directing or writing for film: “I’m definitely not there yet in terms of directing, there’s still a lot I need to learn. But I would keep those doors open, for sure. But I would love to write. My dad is a journalist, so he got me interested at a very young age.”

At this point, I was eager to learn what was next for this jack-of-all-trades. While hinting that there would be more, she shared two projects in development, Girls Night with Brianna Hildebrand, and Moonshot for HBO Max, a rom-com with a sci-fi backdrop. “I love Girls Night because all the women, both in front and behind the camera, are so fierce and that was a community I wanted to learn from. The movie is hilarious and reckless at times in the way a young adult can be.”

As the interview concludes, I ask Condor about “contact” – the theme of this issue – and whether she thinks the meaning of the word has changed during the Covid-19 crisis. “I think contact can also mean ‘dropping into yourself’,” she replies. “Being dropped into yourself and being mindful and not throwing yourself out and saying, ‘I need to actually take care of myself’.” 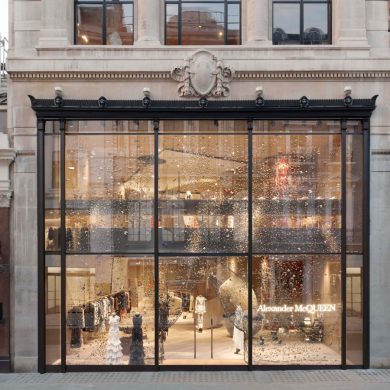