THE definition of identity reads along the lines of who or what you are as a person. What you do, where you come from, what you look like etc. And this realm of trying to understand certain identities is exactly what creative director Mark Weston sought to explore in the Dunhill SS22 collection.

“These are clothing archetypes, but also identities of Britishness, of masculinity, of uniforms, as well as those of Dunhill past and the new era archetypes that we have sought to establish here” comments the designer on his new collection. “It is really about how character and clothing work together; the idiosyncratic combinations of personal style and identity in Britain and Dunhill, as well as a redefinition of them for the house.”

SS22 is very much about taking from the past, present and bringing us an idea of the future whilst remaining close to the Dunhill aesthetic. Utility, style and identity are mixed and matched like a collage to show how in today’s world you do not need to be defined nor have to stick to one stereotype.

Continuing on from last season’s focus on multi-functionality, this notion progresses with added elements of sophistication, elegance and twists on conventional uniforms – stretching from dandies to high-vis handymen.

The Compendium coat makes a return becoming the constant due to its ability to transform into the garment you need for that particular setting. Beginning as a coat, it can be zipped away into a jacket and the lining can be detached to become an entirely new garment proving that one Dunhill coat is really all a man needs.

A trench version of this is introduced made from cotton ventile, the same fabric used by the British armed forces, as well as a replacement for nylon being swapped to silk faille.

Heavy knits are used to create wrap cardigans in pastel colours, the wrap tailored jacket, a known Dunhill staple, is a prominent feature of the collection and an undone necktie in crushed satin hints at relaxed femininity.

Artist Ellen Carey jumps on board to collaborate this season with her prints being added to double-bonded Duchesse satin – a key material typically used in haute couture – which sees itself manifest onto canoe tops and hats, as well as leather goods such as the statement Lock bag. Think of a structured explosion of colour!

Weston has injected vibrance into menswear this season whilst still colouring within the lines. The play on identity and what it means is an interesting step forward changing the well-put-together gentleman we all imagine in our heads when we think Dunhill and mixing elements of those around into his style for SS22. 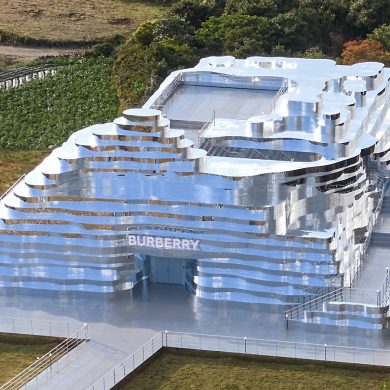