RETURNING to the city of Angels, Tom Ford was met with peace. Having spent the past thirty years living in Europe, his decision to move West was met with a change of climate, scenery and aesthetic. Maybe this evolution was due to the severity of the pandemic, the copious amounts of time spent at home or the laidback lifestyle that Los Angeles is known for, nonetheless the king of decadent fashion is toning it down… well only by a little.

His new take on glamour is keeping it chic but without all the noise – straightforward and effortless. The past year and a half had us tucked up inside but even with the world now opening back up, our favourite, most-thought-through outfits are unveiled in the evenings. We aren’t dressing up during the day anymore – even celebrities are muting their streetwear looks and saving the “glam” for red carpets.

Tom Ford is a master of his craft because he understands culture and change, and more importantly, is willing to adapt to the times. Now, this is where his understanding of social media comes into play. Black does not photograph well, nor do black clothes make a lasting impression in a digital whirlwind, so with this said, his perception of beauty has changed.

For spring-summer 2022, Tom Ford made clothes with simple, contemporary cuts yet are powerful in execution. Each piece has been given the possibility to be dressed down or up allowing less structure to our wardrobes and more fun with our choice of styling. It is not about reinventing the classics but reimagining them to be timeless – take for example, Ford’s red velvet suit for Gucci, or for SS22, a sequinned, slouchy bomber jacket.

Injecting colour into the key silhouettes, Ford paints an opulent picture with shades of nude, lilac, pink, cobalt blue, spring green and pale aqua, not forgetting gold, silver and bronze – it is Tom Ford after all. Elements of sportswear are evident and he credits his son for this influence, but above and beyond the colour, influence and change in perspective, his show notes emphasise his wish that this collection brings hope.

Spring-summer sets the tone for the year and seasonally it is the rebirth, or in Ford’s case, his decision behind using metallics; he quite literally wanted to bring light to the lives of his customers. Ending the show in gold is a bold move for most, but for Tom Ford, a man who is on the search for luxury in all aspects of life, it seemed fitting. Finishing New York Fashion Week with Tom Ford is always a highlight, but for SS22 he was nothing short of being the brightest light in the city.

Previous
Dunhill celebrates their automotive heritage with the GT Collection 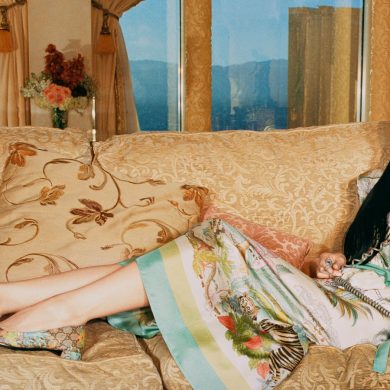