DAYS before the show, London’s Piccadilly Circus lit up revealing the date and time of the Alexander McQueen spring-summer 2022 show. Gradually more of these invitations popped up across the city and over social media drawing more than just the attention of the fashion community in.

When the paper invitation was placed into my hand, creative director Sarah Burton invited us to the Tobacco Dock in East London with the clear instructions that guests were to be dropped off on the 10th floor.

Looking back at the past year’s collections, Burton had delved into nature and the environment, from the muddy banks of the Thames to shining a light on anemones, there was only one direction left to go in. And it was up.

From the rooftops of the Alexander McQueen studio, Burton and her team turned to their windows and used the panoramic view of London as the inspiration to SS22 and named the collection London Skies.

“We watched the weather and captured the formation and colouration of clouds from daybreak to nightfall and documented changing patterns , from clear blue skies to more turbulent ones” explains Burton. “That led me to storm chasing.”

Taking place on the roof of an industrial brick building, a transparent dome was constructed by architect Smiljan Radic that had wooden chairs circling the space within and construction-esque lights lighting it up.

Approaching this suspended bubble, we were met with an astonishing view of London, looking directly at The Shard, The Gherkin and the Tower of London, it became clear why it was so easy to fall in love with the cityscape.

The hues of blue in the sky were met with patches of pink and the descent into night approached while whispers of gossips muted as we took our seats inside.

“I love the idea of the McQueen woman being a storm chaser, of the qualities of storm chasing uniting the passionately individual community of characters wearing clothes,” continues the Burton. “They inhabit the same universe and the clothes are inspired by and made for them.”

The traditional pristine McQueen tailoring helped erupt this show to life as the first model arose from the middle in a double-breasted black wool coat with cloud-like sleeves. Daybreak clouds, a blue sky and stormy evenings were the prints of this collection juxtaposing with block colours and heaps of leather, while parachute skirts and sleeves made a return.

Trench coats were a highlight, either designed with huge puffed out sleeves and rolled hems or crafted from leather with cut-out sides, giving the McQueen girl a chance to choose her armour.

Though masculinity was evident in the 36-look collection through the strength of cuts and attitude, femininity shone bright with dresses that had deep V-necklines, ribbon detailing, corset bodices and a trend of strapless top-halves.

Cotton body-hugging jersey dresses came-back this season but with the addition of crystal and sequin shard rain embroidery that swishes elegantly as you walk.

As the models glided from daybreak into nighttime, the audience were left gasping as a tsunami of crystal raindrops, shredded tulle and netting dazzled them.

A tuxedo jacket was slashed at the shoulders and waist and given satin lapels, a skeletal corset dress was finished with an arched skirt and the finale look, worn by none-other than supermodel Naomi Campbell, brought the two sides together in a cropped single-breasted jacket embroidered with a draping of crystals and paired with an asymmetric skirt from dégradé shredded tulle, black silk, mesh and Paris net – quite literally, the perfect storm.

But Burton notes at the end, “Storm chasing is not only about the beauty of the views but also a sense of mystery and excitement – about embracing the fact that we can’t ever be sure of what might happen next. To give up control and be directly in touch with the unpredictable is to be part of nature, to see and feel it at its most intense – to be at one with a world that is bigger and more powerful that we are”.

It was a show that I am sure myself and others who attended will not forget. It was powerful in terms of design, from the structure we sat within to the clothes that glided past us, but ultimately Alexander McQueen’s power lies in their continually look into nature, putting the world around us on a pedestal proving that fantasy does not always have to be fiction.

Previous
Dior debuts the B30 trainers 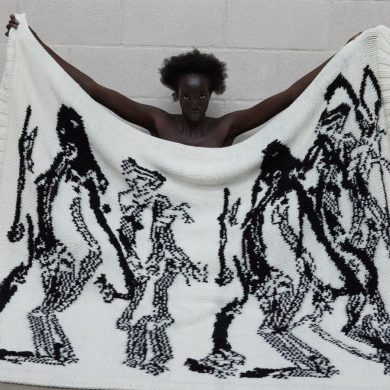