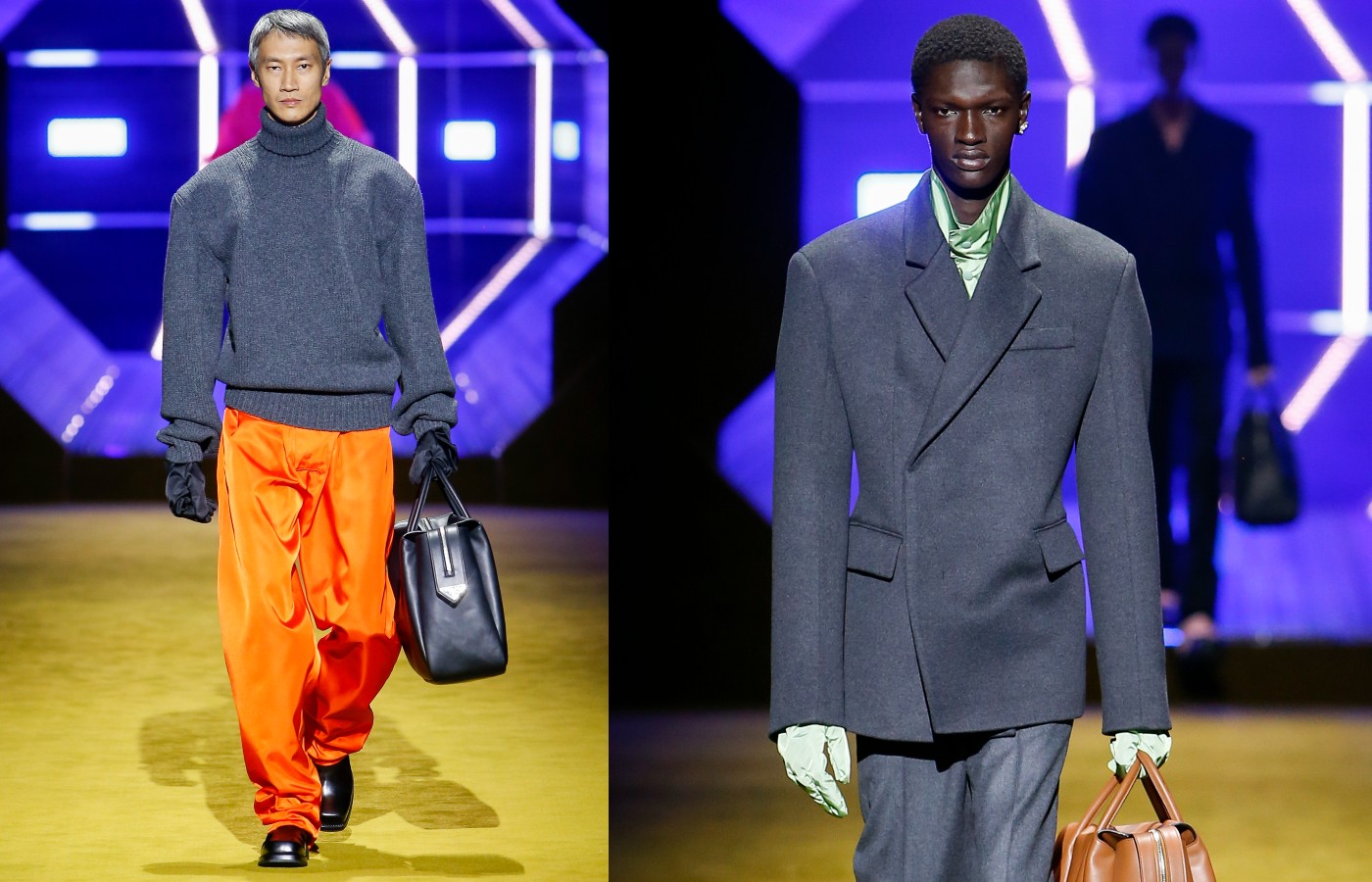 NOTHING is ever as it seems, especially for Miuccia Prada and Raf Simons. Looking beyond the four walls that they live and work in, the design duo has explored and discovered how to interrupt reality – just as a fashion show is a momentary fantasised bundle of aesthetics and cinemas are often a mirror to their audience.

So, as disrupters of their own industry, they transformed the Deposito of the Fondazione Prada into a stage for the Prada autumn-winter 2022 menswear collection.

Within the smoke and mirrors of this show, the new narrative came to life with a stellar cast of Hollywood’s finest, most recognised figures, including Thomas Brodie-Sangster, Damson Idris, Kyle MacLachlan, Tom Mercier, Jaden Michael, Louis Partridge, Aston Sanders, Filippo Scotti and Asa Butterfield to a final look showcased by Jeff Goldblum.

However, though the stars were out this evening, the AW22 collection put the spotlight on the mundane. Through this beautiful juxtaposition and interplay of merit and human endeavour on all levels, Prada designed a uniform that played on the extremes of proportions and the known aesthetics correlated to Raf and Miuccia’s design signatures.

The early signifiers of this yearning for pragmatism were proposed in the rematerialised leather and silk becoming the building blocks for sartorial tailoring. Universal clothing was at the forefront of the two designers minds as knitwear, parkas and MA-1s took centre stage, and notably, Raf’s synonymous oversized silhouette finally made its moment in the Prada sphere.

The AW22 collection was constructed through a modern perspective, as shape and form emphasis the shoulder and waists, balancing the masculinity of broad arms with the femininity of a cinched midriff, making the Prada co-creative directors more akin to architects this season than designers.

With the majority of looks big and bold, the slimmer outfits offer an element of sophistication and discipline to this vanguard of Prada archetypes.

The common threads of Raf and Miuccia’s partnership have started to show as gloves returned in a more casual nylon manner while layering of lightweight turtlenecks continued with the addition of cravates as well as a thinner cotton layer was exposed under the wool trousers cementing its seasonal purpose.

Where the inspiration for this collection truly formed is one left unanswered but after two years of reliance on key workers there is a clear parallel on their importance. Embracing practicality and creating a luxury around the everyday, workwear has been Pradafied, and Miuccia and Raf have once again redefined our normal.