By Caroline Simpson
In Main Features

Welcome to the 50th issue of Glass

WELCOME to the summer 2022 edition of Glass, which, I am proud to say is our 50th issue. This is no small triumph in the publishing landscape – strewn with magazines once started and now closed – I found one statistic that said that sixty per cent of all magazines fold in their first year, and eighty per cent fail by their fourth. So, it’s a huge achievement to get to our golden anniversary – our 50th.

To celebrate this special occasion, we asked our cover stars to tell us about golden moments in their lives. The up-and-coming Zimbabwean American singer Tinashe told us: “When I made that first mixtape, it was when I first introduced myself –that’s how I look at it. That was the most special time for me creatively. The beginning.”

While Chinese megastar actor Fan Bingbing said: “Whether it’s bringing Chinese culture to the international stage through my performances or growing our beauty brand from the ground up, I just hope that through everything I’ve done I’ve created a positive impact.”

The British actor Emma Appleton shared with us her experience of working with leading director Danny Boyle on the Disney+ series Pistols as a golden moment for her, explaining that he is someone that she has admired since she was a teenager.

Emerging US actor, Talia Ryder, explained in her interview with us: “One of my golden moments would definitely be making my Broadway debut [as Hortensia] alongside my younger sister MiMi [who played Matilda]. There’s a moment at the end of the opening number of the show, after 10 minutes of bustling, dancing and singing, where it gets really quiet and Matilda appears for the first time. MiMi had started in the show two months before me, so I had seen this moment from the audience a number of times by now, but seeing it from the perspective of being right next to her was so special. After she sang her song, we caught each other’s eyes for a second and gave each other a little ‘we did it’ nod.”

“Oh my goodness, we don’t have enough time,” the UK actor Nathalie Emmanuel explains to us. “Golden moments … I think there’s been so many. I remember going to my first ever premiere in LA, it was the third season premiere of Game of Thrones and it was so emotional. And then right after that it was the Fast 7 premiere, so I flew my family and a few friends over to LA so they could share that moment with me and it was so, so special. I find that so overwhelming because I grew up in this small town and I just remember feeling the sense of pride on my mum and sister’s face.”

For me, the honour of editing Glass has got to be one of my golden moments. This role has given me access to some of the world’s greatest talents in acting, fashion, music, art, culture and human rights, such as Jimmy Carter, Yayoi Kusama, Melvin Sokolsky, Deborah Turbeville, Yao Chen, Ewan McGregor, Vincent Cassel, Krirstin Scott Thomas, Maggie Cheung, Audrey Tautou, Camille Cottin, Son Yi-jin … I could go on.

Each have been featured in these pages since the publication was founded back in 2009. And not only this, of course, it wouldn’t be possible to produce the magazine without the unerring support, sheer talent, and industry of the Glass team. What a career highlight it has been working with my amazing colleagues here.

In some personal and poignant news, having been editing the Glass website since 2011 and the print editions since 2017, I thought the 50th issue would be a good moment to move on from the publication. It is now time for me to pursue some other challenges. I have every confidence that the wonderful team will take the magazine to the next level.

I very much look forward to seeing its new direction. Here’s to the next 50 issues!

Previous
Welcome to the 50th issue of Glass Man 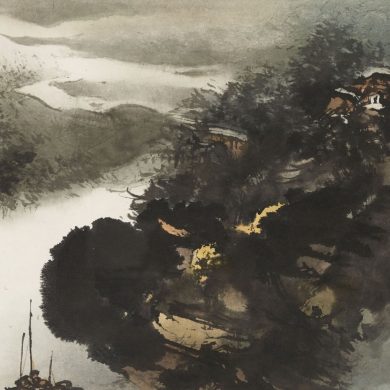