SHOT BY Parisian photographer Hugo Comte, the latest campaign from Paris-based brand Casablanca aims to transcend material fashion by distilling the essence of the brand into modern culture. The Hollywood actor appears alongside models of the moment Anok Yai and Alton Mason in a hyper-sexual campaign rich in colour and epitomising the care-free summer attitude the brand is known for.

Inspired by the early work of American artist Eric Fischl, the shoot plays on modern American pursuit of dreams in a hedonistic and satirical manner, photographed against the backdrop of Los Angeles, while exuding an inherent sense of consumerism, excess and, pop culture: “I wanted to create a Hollywood moment between models I love, like Alton [Mason], who is a dear friend of mine, and Anok [Yai], who I truly love and think is one of the most beautiful women in the world. Then there’s the icon that is Nicolas Cage,” remarked Creative Director Charaf Tajer.

The campaign masterfully merges classical imagery with a distinct sense of modernism, playing upon elements of old Hollywood yet turning them on their head by making them more original and less cyclical: “We revisited the Hollywood heritage with our own life stories, mixing opulence and romance to create timeless images out of the fashion scope, with a universal vocabulary of pop culture,” mentions Comte. 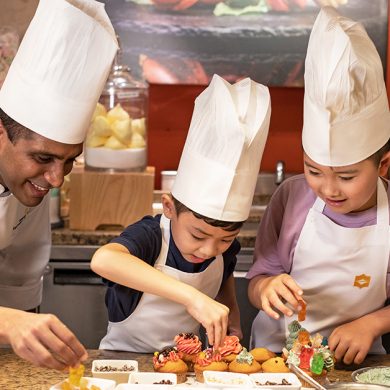