IT SEEMS integral to most spring-summer collections that there must be an element of vacationing infused throughout the clothes. For his latest collection for Burberry however, Riccardo Tisci took this ideal to the highest degree, receiving entire inspiration from the British coast during the summer months, where vacant sands are transformed into a communal, diverse space where people from around the country flock to enjoy the (temperamental) warmth.

It seems incredibly fitting that Burberry should create a collection entirely influenced by the beach, after all it was their infamous nova check two piece swimsuit (both authentic and bootleg) that had many a Brit sunbather in a chokehold in the 2000s. This print, as with any collection by the British house, is of course a focal point of the garments, and used in a multitude of layered looks which seem to reference the removal of clothing that happens once upon the sandy shores.

For a Summer collection inspired by the coast, layering is an ironically key element. Fishnet dresses (literally, fishnet) are layered with belted lace and silk slips, which indeed create a fish-like silhouette when in movement. Tulle catsuits are likewise a staple in many ensembles, all owing to the idea of revelation and a sensual marriage of lingerie and swimwear.

The body is continually revealed through careful cut outs in both the menswear and womenswear lines, however it would be foolish to assume everybody would arrive at the beach baring flesh.

With that said, Tisci introduces a line of more modest garments, owing to the diversity of the coast during the Summer. From sunburnt denim two pieces, to gothic black tailoring and gowns contrasted by flip-flops , Tisci exaggerates the many attitudes that create the British cultural landscape and masterfully infuses all into a comical and charming summer collection, perfectly keeping in line with the brands stake point in British heritage.

Next
Li Ronghao debuts as the new ambassador of Valentino 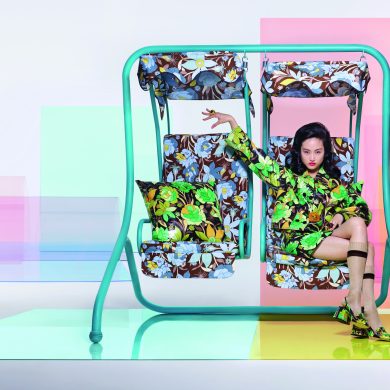