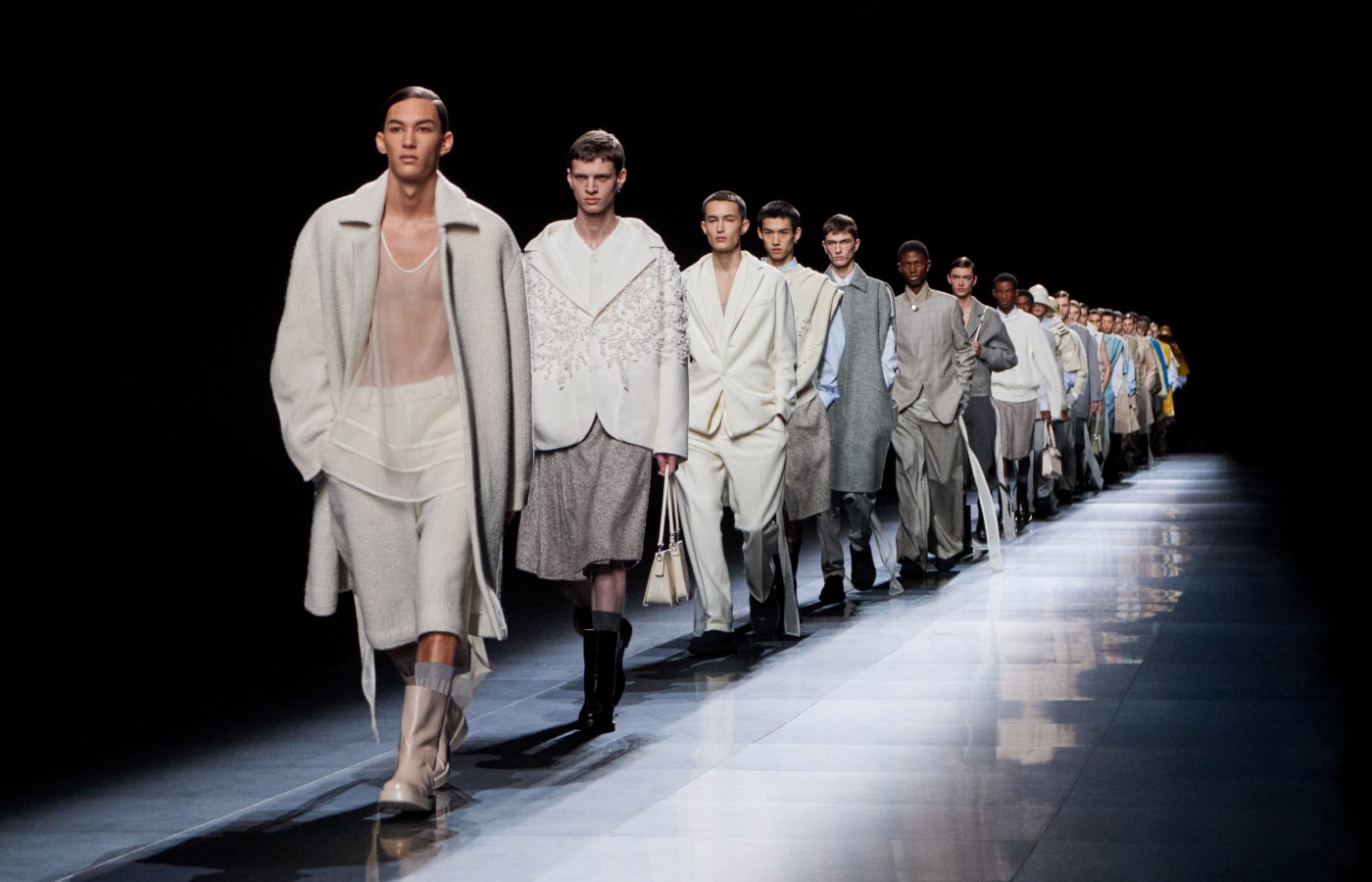 KIM Jones is an avid fan of history. Known for unravelling narratives from literary giants into his collections, the British designer this season is not infusing stories of foreign lands into his clothes but is rather taking a moment to dive into the first chapter after Monsieur Dior’s death.

Taking the ‘rejuvenation’, as the collection notes describe it, of the House of Dior through the lens of its chosen heir, Yves Saint Laurent, the autumn-winter 2023 collection is all about emphasising the beauty of the old meeting the new – but this is Jones, so T.S. Eliot’s The Waste Land was also at hand as a device to lean into.

Returning back to 30th January 1958, the date where Yves Saint Laurent presented his debut collection for Dior, cementing him as one of the youngest couturiers of all time at just 21-years-old, Jones was intrigued by the ideas that the designer brought with him to Dior. Understanding how to balance masculine with feminine motifs during a time where conservative clothing were the only rules one needed to ensure were followed, Jones took this juxtaposition into his collection.

Upholding the traditions of British tailoring and luxury materials, he has intertwined Haute Couture tailleur into the AW23 collection. Through the amalgamation of juxtaposing manners of garment making, Jones in turn has created hybrid silhouettes that move effortless with the wearer while maintaining the meticulous precision and hidden complexities within the seams that Dior’s history has been so valued for.

Lifting at times straight from the archive – for example he has revived the sailor top from YSL’s ‘Paris’ ensemble in a loosened cavalry twill, but has also reimagines the classic ensuring a contemporary touch is not lost by elongating it into a fisherman’s smock.

Other forgotten pieces were given a slightly bigger reentry into the Dior sphere like the Passe Partout Coat with its loosely tied neck arrives in a cocoon shape in donegal tweed and with zips added to the open sleeves, or notably the off-the-shoulder tailoring has been reinterpreted with a slouchier, more casual effect.

Despite Jones’ focus on bringing pieces from Dior’s history back to life, he didn’t lose touch with the appetite for innovation. Utilising technology and all its advances, 3D printed shoes and boots were adorned by the models, and with the rise of gorpcore taking precedent in trend cycles, utilitarian outerwear played into the seasonal tones of AW23.

Whether you see those moments of going from one thing to another as disjointed or even broken, Jones has a serious knack for finding the beauty in its evolution – even paying homage to it now. Eliot’s work was stark, dark and honest, while Yves Saint Laurent’s brief tenure at Dior was marked by an introduction of a uniform that expressed ease, comfort and ambition.

Elevating this transfusion into today’s world through a muted palette into an environment laced in a similar uncertainty, Jones is able to give us a silver lining drenched in elegance restoring some much needed staples back into our lives.

Behind-the-scenes of the savoir faire of the Dior AW23 collection. Photographs by Sophie Carre: