AGAINST the cold harshness of an all-white encompassing box, the Givenchy menswear Autumn/Winter 23 collection is presented. Since his time as creative director, Matthew M. Williams has established some recurrent themes which are translated throughout his collections, ones referencing to the history of the house, his Californian ideology and merging menswear staples of streetwear and tailoring into one – all of which are presented as loudly as ever in his latest venture, which is abundant in metaphorical messages.

In an age of more-is-more aesthetics, its refreshing to see a collection amplified by such a simplistic backdrop. The cleanliness of the stark white setting not only provides a blank canvas that illuminates the clothing as the models strut down the runway, but also nods to the elements of futurism Williams so often tiptoes along (be it with his work at Givenchy or his own line 1017 Alyx 9SM). The venue is not just some pop-up white box in the middle of Paris, but rather a some conceptual space-craft hurtling through the galaxy.

That being said, this collection actually steers away from the post-modernism we have perhaps grown to expect from the American designer, and instead reinterprets classics with one key ingredient straight from Hubert de Givenchy himself: the idea garments are made to be worn however you like. Cargo trousers are transformed into skirts, boiler suits hang from the body and items are layered upon layers to completely transform traditional silhouettes.

This is enhanced by the injection of an Americana sensibility, with flannel, denim, marl, camouflage and plaid all interspersed throughout. The fabrics and deconstruction of workwear almost makes a nod to the rust belt and the decline of heavy industry in America during the late 20th century, perhaps a reference to the designer’s own Midwestern origins.

However in complete contrast, there is an array of tailoring which has become yet another signature of Williams’ collections, though as always, each has been turned on its ears slightly. Suiting – made in the haute couture atelier – is left unhemmed at the seems to create an illusion of an elongated physique.

Whether it be a key motif or just a happy coincidence, a battle between the white collar and the blue collar takes place on the runway, all reimagined by Williams, and once again tying in references to his American heritage. 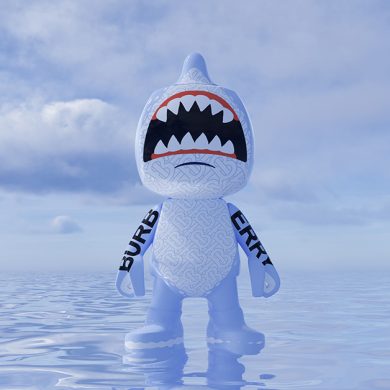 Burberry collaborates with Blankos Block Party on a NFT collection